Ask the Chef: Natural Salt Alternatives that Make for a Delicious Flavor Profile

It's not uncommon for adults to be concerned about their salt intake. After all, salt has been linked to high blood pressure, heart attacks, and strokes. Yet the concern is greater for older adults, because of the way taste buds change as we age. Some of our taste sensors actually die over time, so more flavor is required to stimulate them. In order to compensate for the loss in flavor, seniors often over-salt their food.

So how do you make food healthy and flavorful without all that additional salt? That's a challenge Chef Brett tackles every day as the culinary director at Terracina Senior Living, a senior living campus managed by The Goodman Group in Naples, Florida.

Build Flavor First, Add Salt Later (If At All)

"You want to add flavor to food before salt," Brett explains. Slow roasting with herbs and spices builds natural flavors, so he has developed seven different blends that are used in the kitchens at the campus.

"We really only use a little finishing salt, a little sprinkle to wake the food up a little bit, right before we serve it. And we use Kosher salt, or a bigger grain salt, because the bigger grain gives you a better flavor profile than an iodized salt or a table salt."

When the food looks good and tastes delicious, there is less temptation – or need – to add more salt. Still, Chef Brett also takes control of the salt at the table. "We never put salt and pepper shakers on the table," he says. "We have salt and pepper grinders, which grind the peppercorns and the Kosher salt, so you actually use less salt to get the same amount of flavor. "

You Can Do It At Home

Chef Brett says you can make the same kinds of changes in your kitchen. He has eight easy steps to make delicious meals while using less salt.

How to Use Spice Blends

Chef Brett worked with a spice company to package the seven spice blends used in recipes at all of the senior living communities managed by The Goodman Group. There are different blends for pork, poultry, fish and seafood, beef and lamb, potatoes, and Asian recipes, along with a salt-free blend (similar to Mrs. Dash) for "salting" popcorn and other snacks. 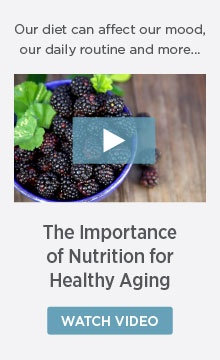 "It's great for us," he says, "because we know exactly how much salt is in the food we're putting on the table. And when we get a doctor's order for a low sodium diet, we can go to the computer, pull it up and show them how much sodium actually went into their meal."

What's in those blends? His pork spice has (in order), garlic, thyme, oregano, cumin, nutmeg, paprika, black pepper, red pepper, and then salt (9th on the ingredient list). Brett says you can find a lot of good products at the store, as long as you shop by reading the labels carefully.