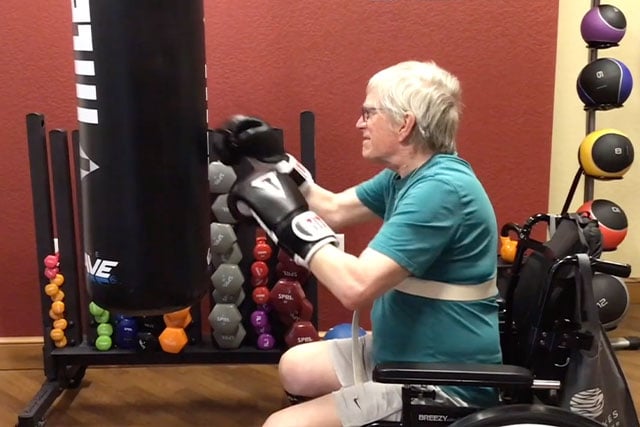 Tom and Pat E. loved to travel. Retirement left them with plenty of time to do the things they'd put on hold during their working lives. A former Ear, Nose and Throat (ENT) specialist, Tom looked forward to relaxing in the company of his wife, kids, and grandkids. "Things were going pretty smoothly," he remembers, until Parkinson's totally eclipsed their vision of retirement.

Tom's diagnosis came slowly – the signs showed up before his official diagnosis – but that didn't make it any easier to swallow. "I kept thinking, 'Why me?'” Tom says. The news gave Tom and Pat a jarring new perspective on his telltale symptoms of isolation, depression, and social withdrawal that can go hand-in-hand with senior living.

But Tom was never one to slow down much. Hot on the heels of his prognosis, he and Pat began researching ways to stay ahead of it.

Tom enrolled in exercise courses and sought guidance from local specialists until he and Pat discovered Rock Steady Boxing classes at The Lakes at Stillwater, a senior living campus located in Stillwater, MN, managed by The Goodman Group. The classes are an affiliate program of Rock Steady Boxing, Inc., for individuals with Parkinson’s disease. Classes are taught by Rock Steady Boxing Certified Coaches and include an exercise program that is designed to improve quality of life through non-contact boxing-based fitness curriculum. Workouts focus on overall fitness, strength training, reaction time and balance.

Rock Steady Boxing brings together people living with Parkinson's to engage physically and mentally around real exercise-based programming. Studies show that rigorous exercise can slow the progression of Parkinson's symptoms by increasing range of motion, strength, posture, gait, and enhancing overall quality of life. Rock Steady Boxing seemed like more than just another class – but Tom, a retired physician still driven by process and focused on detail, was skeptical.

"Everyone you talk to says, 'Boxing? Really?'" Pat says. "It didn't strike me as being a practical approach," Tom adds. "It took a while to tap into that." Tara Shafrath, program director of Rock Steady Boxing at The Lodge at The Lakes at Stillwater, helped Tom connect the dots between his efforts and real results. "He's a former physician, so he's a perfectionist," she says. "He's so smart, witty, and 'with it.' He's also a real athlete, and he wants to be treated like one."

And Tom relished it: "There's no sugar coating here," he says with a grin. "It's a jungle out there."

Once he overcame his reluctance, it wasn't long before Tom and Pat both saw measurable benefits from Rock Steady Boxing.

Before beginning the program in March, he was completely wheelchair-bound. He scored zero out of a possible 40 points on the Fullerton Advanced Balance (FAB) scale, which measures balance and mobility aptitude; he was able to stand from a seated position one time in 30 seconds; he failed a Timed Up & Go (TUG) test, which times subjects as they stand up, walk 10 feet, and return to their seat, because he was unable to perform the task even once before the test's three-minute cutoff.

Six months later, on a regular Rock Steady Boxing session schedule (Mondays, Wednesdays, and Fridays from 11 a.m. to noon), he'd outpaced all metrics. By his second evaluation in September, he scored a 5/40 on the FAB, performed 10 sit-to-stand exercises in 30 seconds, and completed the TUG test in just 1:13. These days, he even chooses to stand for his boxing sessions on occasion.

"I truly saw an improvement," Tom says. Pat and Tara did, too. They all note that Tom's speech has gotten steadier, allowing him to speak louder and more clearly, and that his overall mental acuity has shown improvement since beginning Rock Steady Boxing. Where he'd often been sedentary and silent at the time of his diagnosis, Tom was regaining the ability to communicate with the people he loved.

"I don't even have to tell him he's got boxing tomorrow," Pat says. "He reminds me. It's part of his routine now – it's a part of his life."

A Place to Socialize and Be Held Accountable

Other improvements are less measurable but no less visible. Striving toward a common goal creates a sense of community and belonging among the boxers (Tara calls it an "unspeakable bond"), and trainers like Tara reflect their enthusiasm.

"Emotionally and socially, he's flourished," Tara says. "I'm his cheerleader and encourager, but I'll also hold him accountable if I know he's not giving it his all. This is hard work. [People with Parkinson's] are real athletes, and we're gonna give them real training sessions."

And members like Tom give that energy right back. "It's very rewarding," he says. "For the first time in my life, I've found something that's healthy for me and is fulfilling at the same time. Before Rock Steady Boxing, I thought I was going nowhere. I needed help."

With his work ethic, routine, and coaches keeping him accountable, Tom is beginning to resemble the husband, father, and grandfather his family had known for decades. From his wife to his grandchildren, Tom's family can see a future unrecognizable from the one he would've faced without an exercise program like Rock Steady Boxing.

Pat remembers a time over the summer that their grandson saw Tom's boxing gloves and asked for his own pair. "He said, 'My dad's gonna teach me how to box so I can box you,'" Pat says.

"I don't know," Tom says with that grin. "He's a pretty tough little guy. I don't know if I stand a chance."

By giving him greater independence, newfound confidence, and more quality time with family, Rock Steady Boxing has led Tom to an improved quality of life and helped him come to terms with his diagnosis. "The future is unknown, and it's going to stay that way," he says. "But now, I can accept that – and more than that, hopefully move around it and through it."