120 Miles Per Hour at 90 Years Old: An iFly Outing for Adventurous Oregon Seniors 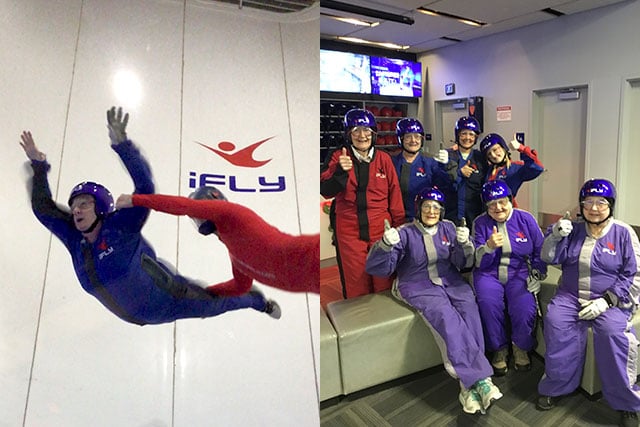 Kate P. says she's never really been bored in all her 82 years. Her secret? Being up for almost anything.

"I regard it as curiosity," said the resident, who lives at Miramont Pointe, a community managed by The Goodman Group. "I really enjoy getting out and seeing things." These days, those "things" usually include shopping trips, long walks and visits to some of the scenic areas around Clackamas, OR, in suburban Portland – except for the time it meant jumping headlong into a wind tunnel at iFly Indoor Skydiving back in January.

"I'm 82, so there's only a certain amount of adventurous I can be," Kate said. But her first 81 years certainly prepared her for adventure. She learned to fly planes solo as a teen, she'd flown in gliders numerous times, and she'd even lived through 50 years of hurricanes on the North Carolina coastline. To Kate, iFly (billed as "safe for ages 3 to 103") was an ideal meeting of possibility and thrill. "I would never jump out of an airplane, but this seemed safe and interesting." While she told her lunch group about the idea, her son remained concerned about his mother putting herself into such an intense situation. "He said he didn't think it was a good idea," Kate said. "He didn't expect me to listen." All that was left was to convince Miramont Pointe that it was a good idea.

After suggesting it, Kate said she was still surprised to see skydiving appear on the schedule board. For her part, Life Enrichment Assistant Angie E. says she was supportive of the request. "I was excited for them," she said. "I would like to think at their age, I might want to do something like that. They don't limit themselves to what they can do."

"I expected more resistance," Kate added with a laugh. But with the residents' excitement and it being a safe activity, Miramont Pointe felt this was a great opportunity for residents.

Stepping into a wind tunnel has a way of getting anyone's blood pumping, let alone people in their 80s and 90s. Suited up and guided by "patient" instructors, the residents took flight. "I was afraid I would lose my shoes," Kate said gleefully – kind of like the hurricane-force winds she used to see back home.

Originally created to simulate freefall for air force applications and skydiving sport, vertical wind tunnels like iFly move air at around 120 mph – terminal velocity for a human body falling through the sky – to maintain a diver's position in the tunnel. Instructors help divers orient themselves to increase and decrease drag, allowing them to move up and down in the tunnel.

It's a lot to handle, which is why Kate was just one of several residents who banded together for Miramont Pointe's iFly trip. When they came back, photos from their outing circulated the halls, generating more and more interest in a more adventurous calendar.

"There are a lot of people out here that are up for most anything, physically or mentally," Kate said. One of those residents, Marie M., 90 years of age, brought three generations into the tunnel, diving with her granddaughter and great-granddaughter, the youngest of whom is in her 20s.

Marie says her family was game for it (they've since visited iFly again), but that she would've done it without them, too. "My family knows I'm gonna do what I want to now," she said. That attitude fits with her lifestyle. Marie says she was always fond of adventure, having enjoyed jet boating and parasailing in years past.

And like Kate, Marie said she would go to iFly again – but she'd really love a chance to go zip lining or bungee jumping, too.

"We've all still got our brains"

For Kate, Marie, the Miramont Pointe residents, and assisted living communities everywhere, events like iFly matter more than the typical outing. They remove the age limit on exciting activities in a way that doesn't endanger or coddle them. Kate said it best: "I thought it was really great that they didn't look at us as a bunch of old fogeys."

Miramont Pointe and other communities managed by The Goodman Group are dedicated to finding ways that encourage residents to live the lives they want to live, especially if it includes a bit of adventure every now and then. "I hope they ask us for more of these kinds of things," Angie said.

Kate says her appetite for adventure isn't necessarily at odds with her age – rather, it contrasts with society's perception of seniors as frail, weak, and unwilling to try new things. "Everybody's so afraid, they frequently take the fun out of life," Kate said. "We've all still got our brains and we want to keep them going."